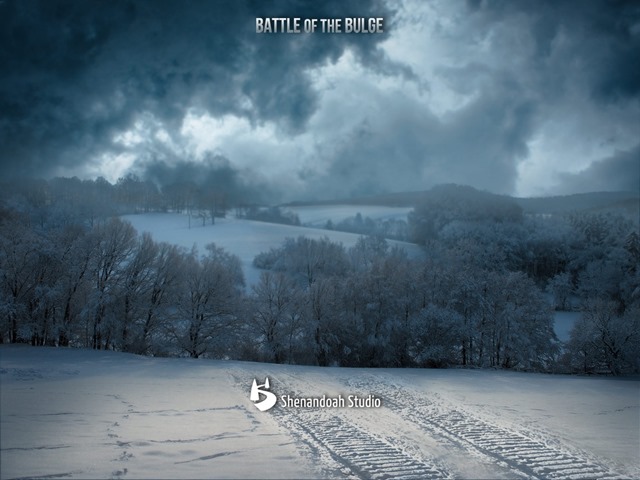 Battle of the Bulge

This is a very nice historical strategic game about the Battle of the Bulge, the German offensive in December 1944 against the Allies in Belgium. It is a sort of a historical turn-based battle simulator. The historical scenario is very accurate. On division level you are leading the troops on the Axis or Allies site to victory or defeat.. This is history wargaming in it’s pure form…

Historical background of the games setting

It is December 1944 and the Allies have landed on the beaches of France. The Germans counter-attack in the Belgian Ardennes with their last massive offense of the Second World War; the Battle of the Bulge.

“I have made a momentous decision. I shall go over to the counter-attack, that is to say, here, out of the Ardennes, with the objective, Antwerp.”1

With these words, Adolf Hitler set in motion preparations for a battle that was to assume epic proportions, the greatest German attack in the West since the campaign of 1940 which had brought down the Netherlands, Belgium, Luxembourg and France in swift and ignominious defeat. It was destined to involve more than a million men and to precipitate an unparalleled crisis for the Allied armies. It was also to involve one of the most egregious failures in the history of American battlefield intelligence. Yet it was also to become the greatest battle ever fought by the United States Army.2

The storyline is perfect. It is like reading and playing a history book on this battle.. You will get a day by day historic overview of what happened in those days when you are playing the battle. The goals, units, commanders are all historically correct. The initial setup of the units and the reinforcements are in accordance with history.3 In the main menu there is a “History” section where you can find a lot of historically correct information and authentic pictures on the battle. You will learn a lot of the Battle of the Bulge here but Shenandoah studio should have mentioned the sources they used for this little history lesson. 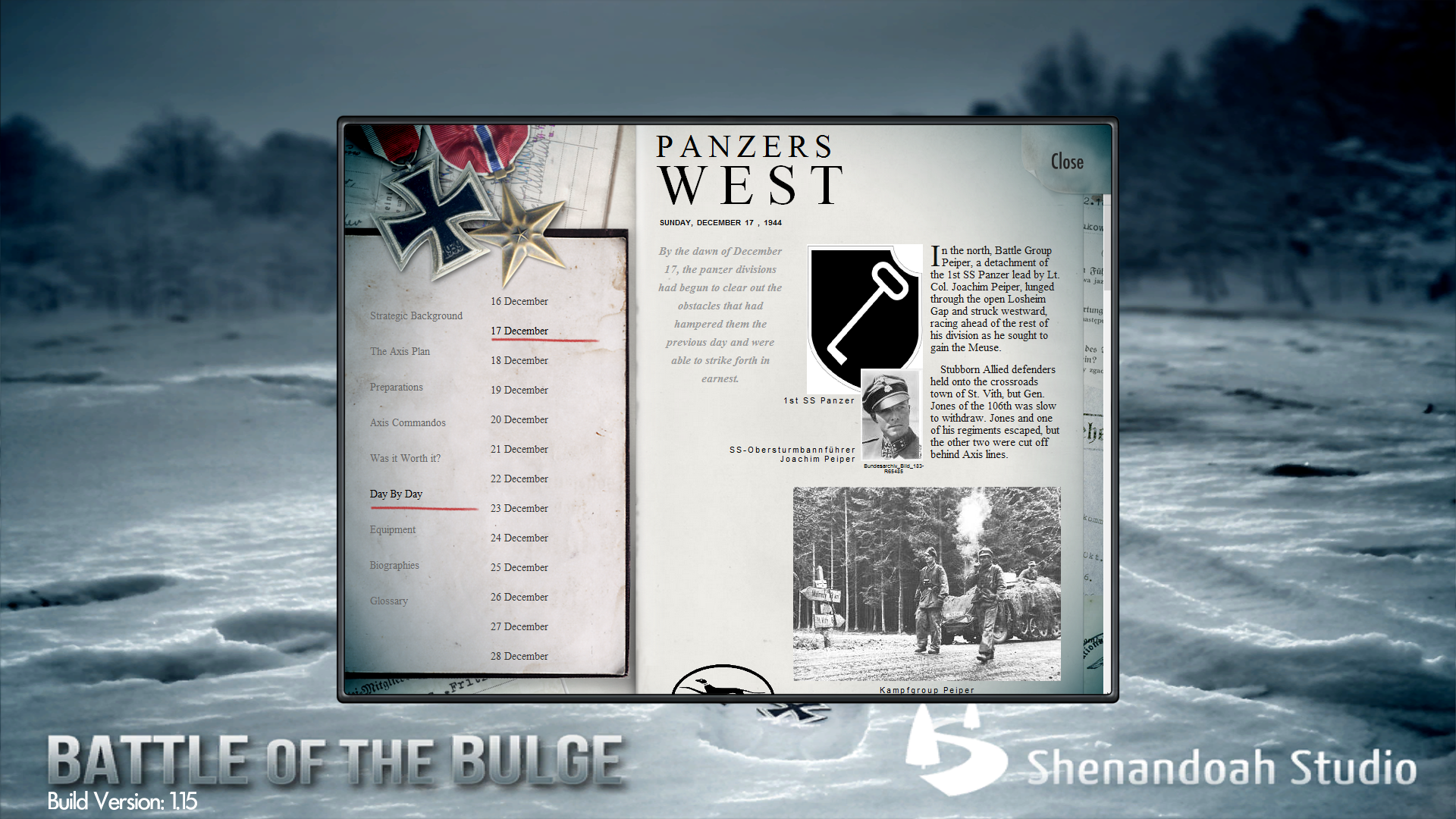 Sucks. The graphics look like a digitalised version of a bordgame. Don’t expect much here… The icons used for the units show a vague contour of a tank, infantry or mechanised unit. That’s it. The map does resemble the Ardennes and the site where the battle in reality took place.4

Those seem to be a bit simple in the beginning. A tank and mechanised can drive up to three area’s, infantry one. All the units have up to 7 strength/firepower/health combination points. But when you check the details of the “Combat Preview” window you will see that every combat does have a lot of parameters that count and have historical resemblance to reality. 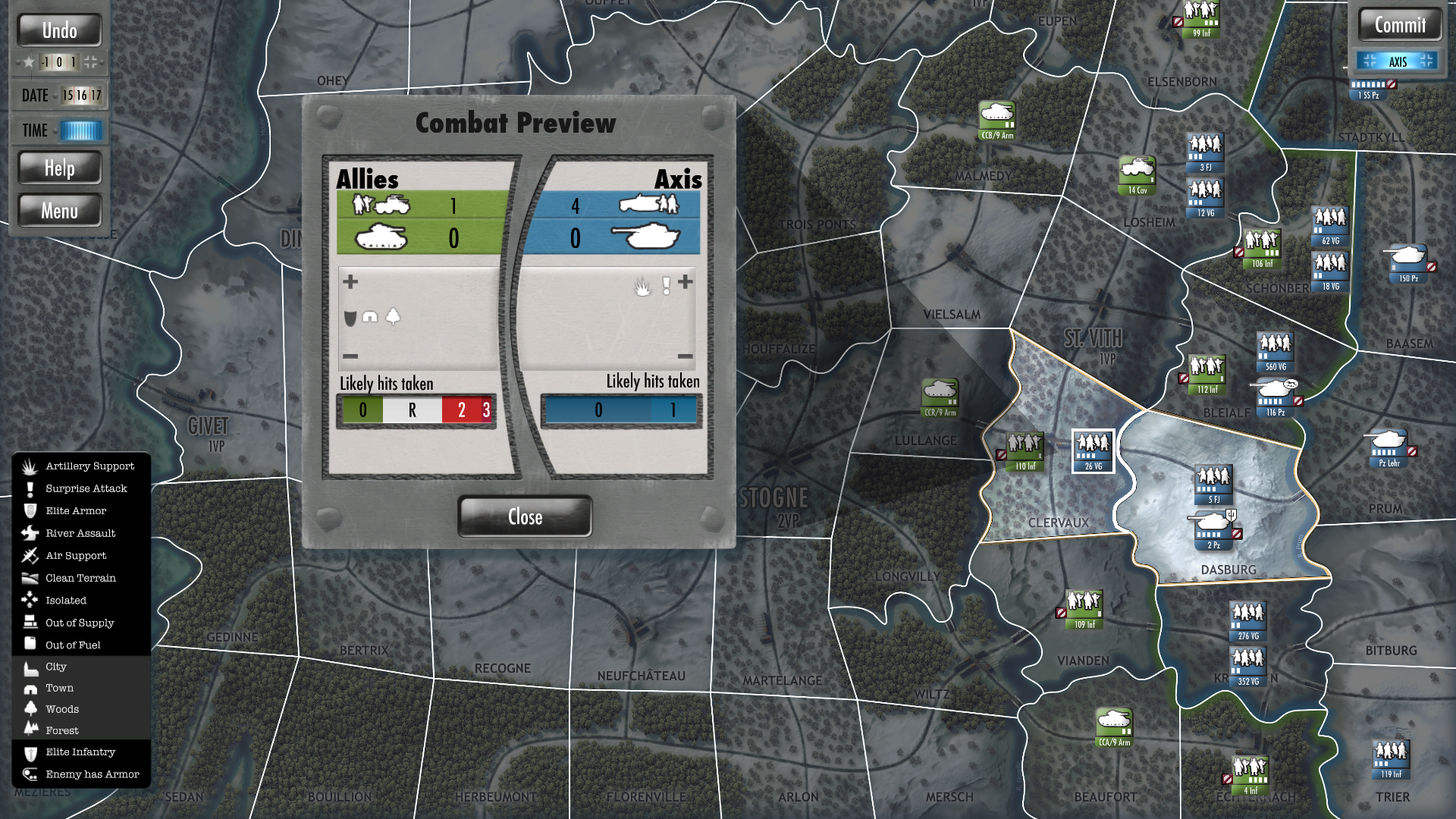 When you are starting a game against the computer you can choose your opponents personality by clicking on a leader like Patton or Bradley with their own style of command which is authentic.5 In the main menu there is a “history” section where you can check biographies of different historical commanders of the battle of the bulge. Very correct and educative.

5 Charles B. MacDonald, A Time for trumpets, the untold story of the Battle of the Bulge (New York, 1985). 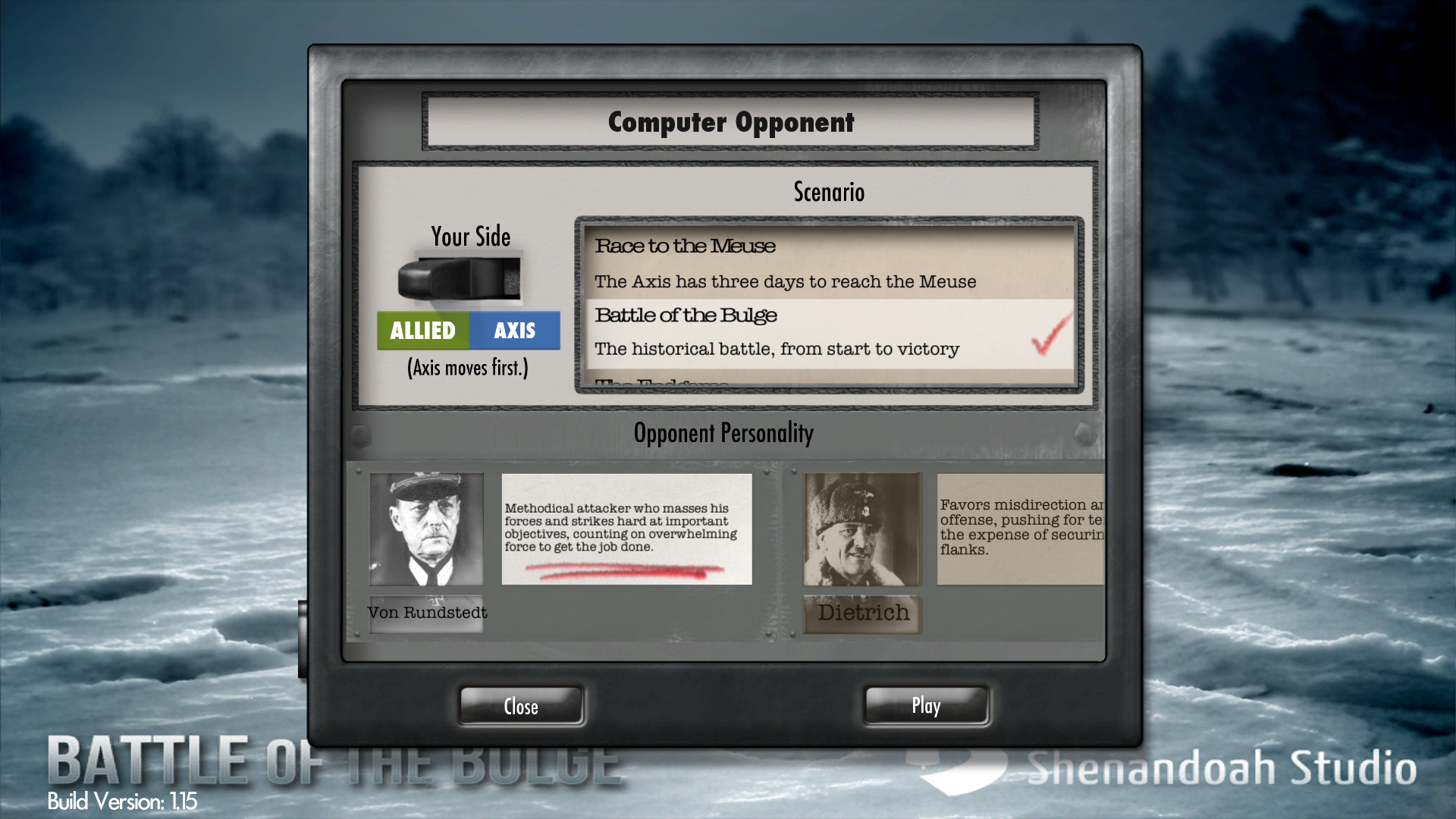 Rattling machineguns and the sound of rolling tanks are nice. At every days briefing you will hear old music but it is not authentic. For example I noticed when playing with the Germans I heard a Dutch (Netherlands) song and not German.

Battle of the Bulge is a turn-based game. Every turn represents a couple of hours. In one turn you can only ‘activate’ units from one area. So with these units you can attack and move. After that combat takes place, your turn is over and time shifts a couple of hours further on. This is too far from reality because you should be able to ‘activate’ the units of all areas every turn. It does make the game playable on a fast pace though…

Used sources for this review

MacDonald, Charles B., A Time for trumpets, the untold story of the Battle of the Bulge (New York, 1985).

More information on the games topic to enlarge your historical gaming experience!

2.”Battle of the Bulge” with a lot of American veterans being interviewd.

3.”Secrets of World War II – The Secrets of the Battle of the Bulge”